Recently, there have been two well-known professional athletes who changed their names. The first is Chad Johnson, former Cincinnati Bengal and current New England Patsy.

Chad Johnson was an unstoppable force, who scored touchdowns almost every game. He was on pace to become a celebrated Hall of Famer; UNTIL…he did the unthinkable! (Did anyone actually think it was a good idea?)

Chad decided to legally change his surname to his jersey number, in Spanish! That’s right; he went from Chad Johnson to Chad Ocho Cinco. I guess Mr. 85 wanted to do something shocking, but all he did was shed light on his poor decision making capabilities. (I won’t discuss his engagement!)

Since changing his name, Chad’s skills diminished. Patsy fans were thrilled to welcome the “star” receiver to their team, but I didn’t understand what all the hype was about; I knew his career was over. Chad arrived and failed to grasp the complicated offense. The fans predicted unbelievable stats from Ocho Cinco and he did not disappoint. His numbers are unbelievably horrible; plain “god” awful!

To date, chad played in 15 games for the Patsies. He caught a total of 15 passes. That’s right folks; the guy is averaging a, pedestrian, 1 reception a game! Ocho Cinco earns 5.5 million dollars this year. By my calculations, he is being paid $367,000 a reception! (Not a bad way to earn a living!) 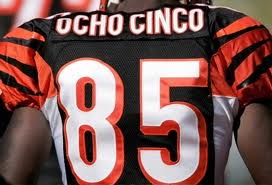 The other athlete who made a drastic name change is Ron Artest. The former St John’s star player and versatile NBA star lost his freaking mind. It is not surprising that Artest changed his name to something ridiculous; after all, he was the guy who thanked his therapist after winning his first NBA championship! (Everyone had to expect that something weird was on the horizon!)

Phil Jackson, who had previous experience dealing with an eccentric character¸ Dennis Rodman, handled Artest perfectly, is no longer with the Lakers. Mike Brown, Mr. Give-the-ball-to-Lebron himself, is not equipped to harness Artest’s “uniqueness!” This freak show will spiral out of control and the Lakers will self-destruct. (This is the last thing Kobe Bryant needs; I think it’s about time to demand a trade!)

Ron Artest went completely bonkers and changed his name to Metta World Peace. I know what you are thinking, but you read that correctly! (If you are a client of Mr. World Peace’s therapist, do yourself a favor and find better counseling!)

Metta World Peace! I can’t even watch the Lakers play because the announcers call him Metta World Peace; it’s complete insanity. If you are wondering, Artest has yet to make a three-pointer this year and his numbers are atrocious. As a Celtics fan, I always argue that Red Auerbach was is the greatest coach of all-time, but Phil Jackson may have surpassed him. Not only does Phil possess more championships, but he had the foresight to jump ship before the SS Lake Show sank!

If you ever have an opportunity to become a famous celebrity and you have an urge to change your name to something distinctive, because you think it will make you eccentric, DON’T DO IT! You will only make yourself to look like a complete ASS and your fame will trend downward! (Don’t be an idiot!)

I don’t blame these two athletes for their dumb decisions; their close friends and family members are responsible. Friends don’t let friends drink and change their names to asinine terms! (At least not legally!)

The government should have the power to decline such requests!!!