*****     Before I dive into the controversial heading, I would like to take a moment to discuss my lack of content. February has been a hectic month. As much as I enjoyed living in Los Angeles, we had to make a difficult decision and chose to leave. That’s right; I no longer live in Los Angeles.

It’s not what you think. I didn’t fail miserably and realize that I am incapable of making a life for myself on the west coast. We simply moved to Burbank which is only one town south of North Hollywood. (I don’t even have to change my cleaners!)

Now that I am resettled and once again a member of the twenty first century with internet service, I plan on writing more frequently. *****

Obviously, those who are familiar with my work will probably assume that this is some anti-religion, anti-Catholicism, atheist rant, but nothing could be further from the truth. I am not saying “fuck the quitting ass ex-pope” out of spite, or hatred; I honestly have a legitimate reason for my vitriol.

Here is why I have a major beef with the man “god” chose to lead his flock. (For an all-powerful being “god” sucks at picking leaders. An unimaginable number of pedophiles and now a quitter! I don’t know about you but I think someone needs to tell this guy that he is not CEO material!)

I have a completed manuscript which took a great deal of blood sweat and tears to produce. In order to write my novel, I did some extensive research and discovered that there were a couple examples of popes who actually resigned from the position of “Pedophilias Maximus!”  A fact that is not well-known.

Now, because of this selfish jackass, formerly known as Benedict (Arnold) XVI, I have to re-write an entire freaking chapter. What a wicked pissah! (You can take the man out of Boston, but you can’t take the Boston out of the man!)

***I actually have never uttered those words unless it was in jest!***

I’ll go back to the drawing board and rewrite the chapter to include the latest quitter.

Another reason I am upset with Mr. “share-the-passion-of-the-Christ-with-the-boys-of-the-world” is the fact that his inability to deal with the shit storm that is about to overtake the Catholic Church forced me to change my Facebook profile.

As soon as I heard the announcement I posted this status:

“Today is a sad day. Due to the Pope’s decision to quit, I will be forced to retire my profile pic on February 28th @ 8:00pm Vatican time.”

Here is my previous profile pic, which I created and loved: 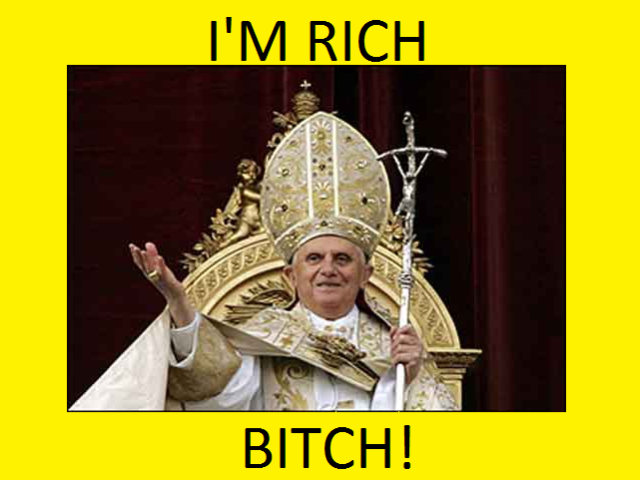 Here is my new profile pic which I found online and I love.

Most people pray for the pope to live a long healthy life, but I enjoy the conclave. I just love the excitement of watching the smoke rise from the chimney and waiting to see who will lead the next generation of pedophiles. (This feud will continue as long as that guy breathes the good lord’s air!)

I have a lot more to say about this quitter, but I’ll save my comments for my post about a church related documentary!