This evening, I was about to pull into the garage when I noticed a beautiful woman walking down the street. She seemed amazing until I observed the leash in her hand; she was walking her dog. I’d rather not be with a woman who owns a dog.

This post is an explanation of the reasons I consider dogs to be a deal breaker. Actually, dogs aren’t a deal breaker. If I met a great girl who was a dog owner, I’d accept the dog without any problems. I just prefer no dogs.

***I am not Michael Vick and I don’t hate dogs. I simply have no desire to own a dog and I consider them to be animals and not humans. That being said, I completely understand that there are many people who love their pets!***

My preference comes from life experiences. First of all, I’ve never been the type of person who likes touching animals or insects. That being said, I would love to own a tiger! (I had fish while living in Boston, but I never actually had to touch them!)

The second reason I prefer no dogs is the fact that owning a dog is a big responsibility, a fact that most people seem to overlook. I enjoy being free to do whatever I please and a dog can limit what activities the owner can enjoy. You can lock a dog in a cage and leave the house, but that seems cruel. (I understand that the responsibility falls on the female, who owns the dog, but I would end up sharing some of the responsibility and I’d rather not have to take care of a dog!)

The third reason I have a no dog preference is based on the fact that I have never picked up dog feces; a fact that will not change! Relationships are difficult to navigate and I don’t need the added stress that comes from the “I am not picking up your dog’s shit” argument. I can be an asshole and there is no way I am backing down from this position. (I often see people picking up after their dogs and I laugh my ass off every time!)

Watching grown adults picking after their dogs reminds me of a Seinfeld joke. Here is the conversation between George and Jerry.

Jerry: “If aliens come to earth, they will think dogs are running things.”

George: “Why do you say that?”

Jerry: “Because all they’re going to see is a bunch of humans being led on leashes by their dogs and then watching the humans pick up after the dogs!”

This is an excellent point!

The main reason may be a bit silly, but it’s real and I can’t help it. I watched the 2005 movie Sleeping Dogs Lie, and it changed the way I look at dog owners. (The movie came out in 2005 so, I don’t feel bad if I spoil the story for anyone who reads this!) Basically, a woman has a sexual experience with her dog and reveals it to her boyfriend which causes problems in the relationship.

The way I see it, there is a 38 percent chance that women who own dogs experienced some sort of sexual contact with the animal and I am not about following a canine. That would be the sloppiest seconds! (There is no mathematical formula for figuring out the 38 percent; I just figure that is the accurate number!)

The final reason has to do with the fact that I am a germaphobe. Even if I am fortunate enough to meet one of the 62 percent clean dog owners, aka a woman who never lost the fight against the curiosity of bestiality, there are still cleanliness issues.

I don’t want to kiss someone who just kissed a dog, which just licked its own asshole. I don’t consider kissing dogs to be a sexual thing, but it is pretty gross! I also think sex should be a spontaneous thing and I would rather not have to stop in order to allow the woman to wash her hands before we engaged in consensual non-dog-involved sexual activities! I would also prefer not having sex on a dog-hair-covered bed. (Call me crazy!) 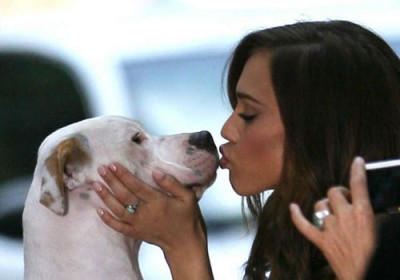 I apologize to any dog owners who may find this post to be offensive! (Now stop being pissed and go scoop up some poop!)