Recently, I received a recommendation to review an article from PsychologyToday.com. The piece was written by Dr. Ken Eisold and titled The Fear of Atheism. Apparently, the United States has more in common with “lesser developed” nations, than other “Western” countries.

Basically, Dr. Eisold believes that most Americans are overly religious and afraid of atheists. The way I see it, believers have it easy and atheism threatens their comfort zone. Whenever believers are met with challenging situations they turn to “god.” This is the mythical character that is all-powerful. Instead of taking control of their lives, believers leave their fate up to their imaginary friend. I guess the reason for turning to “god” is so people can hide behind, “it wasn’t the lord’s will,” rather than come to the realization that they just didn’t work hard enough. (Life must be pretty simple when you have a crutch to lean on!)

I get it; losing faith and understanding there is no higher power, leaves people without their safety blanket. Believers don’t fear atheism, they fear losing their “protector.” We live in a scary world so I understand the need to create an omniscient being who watches over the “good” people. (Some people can face life’s challenges on their own!)

The article is a good read and I found the most fascinating bits of information to be the statistics. Dr. Eisold reports that 48% of Americans would disapprove of their children marrying an atheist; marrying a Muslim, ranked slightly higher with only 33.5% of Americans opposing. (I shed one invisible, all-powerful tear when I read those numbers!)

Dr. Eisold also reveals that atheists are the lowest of the low. A study found that “Americans ranked atheists lower than Muslims, recent immigrants, gays and lesbians and other minority groups in ‘sharing their vision of American society.”

This study is quite revealing. The way I see it, believers are extremely hateful people!

Another disturbing fact is about the “closet atheists.” Some people are forced to keep the truth to themselves in order to remain members of their respective communities. There are atheists who live in small towns where they are forced to hide their knowledge. The one case mentioned in the article is about a single lesbian mother who lives in a small town, in Texas. (Single? Lesbian? Mother? That’s what I call a three-time offender; I’m surprised they haven’t strung her up, yet!)

***I have never been to a small town in Texas so I can’t really comment, but I don’t hear good things! (If my comment was offensive, forgive me and allow “god” to punish me!)***

Obviously, this must have been a misprint because small towns in Texas have yet to evolve, so I’m not sure we can group them in with the rest of America. (If you know of someone who is trapped in a small Texas town, do everything in your power to free the individual from their bondage!)

I must be weird because I jump at the chance to tell someone that I don’t believe in “god.” (I guess I just love to see the look of consternation on their face!) 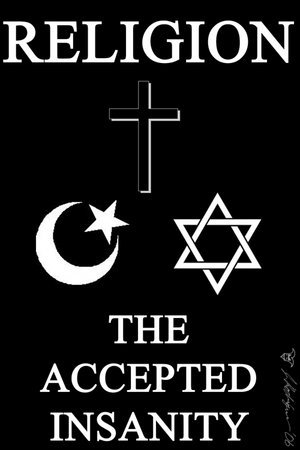 To believers, I say fear the atheist; for he reveals a truth that you are ill prepared to receive!