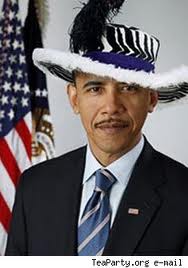 Everyone has watched one of the many “fun with audio” videos. For this entry, I have a little fun, with actual words!

This is my revealing interview with the 44th President of the United States of America. ENJOY!

Me: “Mr. President, first of all, I would like to thank you for taking the time to sit down with me; I know you have a busy schedule.”

Me: “We’ll start with some easy questions.”

Me: “Which is your favorite car company?

Me: “Did you hear Warren Sapp say that Tim Tebow is not the greatest quarterback in NFL history?”

Barack Obama: “Warren’s mistaken…uh…in terms of how he characterized it.”

Me: “I think that will do for the easy stuff; I have some challenging questions for you and I’ll need you to be honest.”

Barack Obama: “I want to be honest.”

Me: “How does it feel to be the worst black President in the history of the United States?”

Barack Obama: “First of all, I will say, that, we have been certified by independent groups as the most transparent White House in history. It’s important to understand, we are the first White House, since the founding of the Republic, to list, every visitor that comes into the White House…ah…online; so, you can look it up. People know more about the inner workings of this White House, the meetings we have…uh…we excluded lobbyists from boards and commissions, but we also report on any lobbyist who meets with anyone who’s part of our…uh…part of our administration, so we’ve actually followed through on a lot of the commitments that we made.”

Me: “I think it’s great that you want to be transparent, but you didn’t answer my question.”

Barack Obama: “I think it is a fair criticism; I’ve acknowledged that. And that’s why, as we move forward, making sure, that, in this last leg, these last 5 yards before we get to the goal line, that everybody understands exactly what’s going on.”

Me: “I want to congratulate you on finally bringing the troops home from Iraq. Have people been sharing their experiences?”

Barack Obama: “You hear stories everywhere you go; I get letters all the time.”

Me: “That’s great! Mr. President, Bill O’Reilly is a certified dick, and one of your biggest critics. Now that you fulfilled your promise to bring home the troops, is there a program in place to kill O’Reilly and create a robot replacement for him?”

Barack Obama: “It is my greatest hope that we can get this done. Not just a year from now, but soon…ah…we came extremely close, we now have a Bill that’s come out from the House, come out from the Senate; that’s unprecedented.”

Q: “I think it’s great that the House and the Senate worked on the robot together. Basically, you’re saying that Bill O’Reilly is as good as dead?”

Me: “I saw how you sent in the troops to take down Osama Bin Laden. Are you planning to do the same with Bill O’Reilly?”

Barack Obama: “We had this enormous opportunity, but, the way the rules work in the United States’ Senate, you’ve gotta have 60 votes for everything…uh…after the special election of Massachusetts, we now have 59; we are calling upon our Republican colleagues.”

Me: “I’m sure someone will have a change of heart.”

Barack Obama: “My hope is…is that they accept that invitation and that they work together with us over the next several weeks to get it done.”

Me: “Good luck! Are there backup plans in place?”

Barack Obama: “We’ve got a whole range of proposals.”

Barack Obama: “There you go!”

Me: “Let’s move on to a more controversial subject.”

Me: “There is some rumbling that you enjoy the ladies.”

Me: “I honestly expected you to deny it. Would you say your interest is average?”

Barack Obama: “A lot bigger than that.”

Me: “How does your wife feel about this?”

Barack Obama: “This is something that we’ve been…uh…dealing with since the beginning.”

Me: “There are some who claim that you have a problem with prostitutes. In fact, I saw some of the coverage on c-span.”

Barack Obama: “Not every single aspect of it was on c-span.”

Me: “Do you take these women back to the White House, or do you use another government facility?”

Barack Obama: “Now keep in mind, most of the action was in Congress.”

Me: “When you say the Congress, do you mean the Senate?”

Barack Obama: “Both in the House and the Senate, those were all widely televised. The only ones that were not, were…”

Me: “Hold on a second. What do you mean televised?”

Barack Obama: “There are no surprises, no secrets; that’s going to be an imperative. It’s gonna be one of my highest priorities.”

Me: “I know you said this was the most transparent White House in the history of the US, but I think you should show some discretion.”

Barack Obama: “What we’re trying to do is to increase transparency.”

Me: “Your lifestyle must drive your wife crazy.”

Barack Obama: “We’re just gonna have to work our way through this.”

Me: “Does she try and push you to stop?”

Me: “What type of women are you into?”

Me: “Do you frequent the same women?”

Barack Obama: “After they’ve gone through a trial period.”

Me: “How much would you say you spend daily on prostitutes?”

Barack Obama: “An average of five hundred and fifty dollars.”

Me: “Wow! That’s a serious habit. What are the benefits?”

Barack Obama: “Get a workout once in a while.”

Me: “And what is the biggest negative?”

Barack Obama: “The problem is the number of people.”

Me: “What’s the hardest part of meeting a new prostitute?”

Barack Obama: “Trying to get a sense from them of what it was that they were trying to do.”

Me: “What is the first question you ask?”

Barack Obama: “Tell us, what are you doing with your customers who want to stay in their homes.”

Barack Obama: “We now think, we shouldn’t give you a home modification.”

Me: “I’ve never heard sex called a home modification, before.”

Barack Obama: “They, also, do a much better job with customer service, with people who are coming to them.”

Me: “Where would be the ideal place to bring a prostitute?”

Barack Obama: “To a remote area, somewhere in rural America.”

Barack Obama: “You saw declining values all across the country.”

Me: “I know you like the high end women, what would you say about street walkers?”

Barack Obama: “Bad idea, most of the time!”

Me: “Should prostitutes consider other business options, maybe joining a multi-level marketing company?”

Barack Obama: “They don’t want to do anything else.”

Me: “I think they’d enjoy the extra income.”

Barack Obama: “Everybody would love to have that.”

Me: “Would you consider yourself a pimp or a long-legged mack daddy?”

Me: “Since I have no idea what that would be, I’ll just call you a pimp.”

Me: “Who would you say is your bottom bitch?”

Me: “Finish this sentence. Your clandestine adventures with prostitutes…”

Barack Obama: “Has not met the entire need.”

Me: “I hear that you are working on new legislation to make it easier for pimps to make money.”

Barack Obama: “That’s gonna go a long way to bringing the unemployment rate down; cause that’s the fastest generator of jobs across the country.”

Me: “Should banks take the risk of backing pimps?”

Barack Obama: “Even profitable, successful businesses are having trouble getting financing, because banks frankly just don’t want to take the risk. After haven taken way too many risks before, now, they’re taking no risk.”

Me: “What, exactly, does your administration plan on doing to help out the pimps?”

Barack Obama: “We’ve been waving guarantees and fees, trying to streamline the process; these are not insignificant savings.”

Me: “I also heard about the tax breaks for pimps; what should they do with the extra money?”

Barack Obama: “If you can take that money, and instead of paying Uncle Sam, you reinvest it in your business, you can grow it further – so we think that that’s the kind of strategy that makes a lot of sense.”

Me: “Should pimps hire a large number of prostitutes or should they concentrate on a few women?”

Barack Obama: “We want to, also, make sure that we’re providing tax credits for hiring; that will help lower they’re costs. We set up a program; so far, four million people have taken advantage of, across the country.”

Me: “What is the ultimate goal of this new program?”

Barack Obama: “I’m hopeful that we’re going to continue to see, more and more people take advantage of it.”

Me: “What advice would you give a young prostitute who wants to make a lot of money?”

Barack Obama: “Take the youngest healthiest people. Leave older, sicker, individuals out; their less likely to have to pay out.”

Me: “Do you feel bad for the women who have to sleep with disgusting men?”

Barack Obama: “They should be able to get some incentives for that.”

Me: “Mr. President, thank you for taking time out of your busy schedule and for being completely honest. What are your expectations for this interview?”

Barack Obama: “I think the idea is a good one; you make a lot of money.”

Me: “Thank You sir! Should I ask someone to help me improve this post?”

Barack Obama: “That is a money loser!”