Most people get confused when it comes to the topic of sportsmanship. The term has nothing to do with the score. Sportsmanship is about how you treat the opponent; competitors should always shake hands after the contest and say, “good game.” You can even help an opponent get up after a play is over, during a football game. That is all that sportsmanship encompasses.

I support running up the score because there are many players on each team who put in a lot of hard work during the week and they deserve to get in during “garbage time.” These backups also deserve to run the same plays as the starters; they want to score too! Running up the score can also be a great way to send a message to the next opponent. No one wants to play against the team that scored 70 in their previous game; the psychological effects are immeasurable. The losing team will understand that they do not belong on the field and the next opponent will have some fear. Plus, recruits want to play for a coach who will put up the big numbers. (Chicks dig touchdowns!)

Last year, former Florida Gators coach Urban Meyer allowed a walk-on senior defensive lineman to carry the ball three times while the team was on the goal line. The kid, a hard worker, was rewarded on senior day, and Meyer didn’t care about running up the score. (It doesn’t get classier than that.)

Meyer also had a great way of answering any disrespectful behavior. During a rivalry game against Georgia, the Gators were embarrassed. After scoring the first touchdown of the game, the entire Georgia bench ran into the end zone and celebrated. The following year, the Gators were up big against Georgia and instead of allowing the clock to run out, Meyer called timeouts to prolong the game.

Also, it is important to remember that the games are sixty minutes long. Players should give it their best until the final whistle blows. If you don’t want the other team to run up the score, play better defense. There are too many instances in which one team amounts a big lead, then they decide to shut it down and are forced to work hard to avoid an epic comeback. (RUN IT UP!)

My favorite coach of all time is Steve Spurrier. While he was at Florida, he constantly ran up the score. He is known as “the old ball coach.” I believe the moniker was given to him because his teams scored more than basketball squads. Not only did Spurrier constantly run up the score, but he did a little trash talking at the press conferences. Here are a couple of his best lines:

“You can’t spell Citrus without U-T.” UT stands for Tennessee, one of Florida’s rivals. The second place team in the SEC East usually went to the Citrus bowl.

“But the real tragedy was that 15 hadn’t been colored yet.” There was a fire at Auburn’s football dorm which destroyed 20 books.

Spurrier was notorious for running up the score. Whenever the Gators failed to score at least 60 points, I felt as if we didn’t play well. (Yes, I said we. I am “one of those fans”!) The best Steve Spurrier story came in the Sugar bowl against FSU for the national title in 1996. The Gators were ranked number one in the country but lost to number four Florida State in the regular season. During the FSU celebration, one of the Florida student assistants was trampled. The Gators moved back to the top of the rankings after winning the conference championship the following week.  The two teams played a rematch in the National Title game in the Sugar Bowl.

Spurrier promised the assistant that he would do his best to get revenge. True to his word, the Gators blew out the Seminoles by a score of 52-20. Spurrier was shown on the sidelines urging his players to run up the score. (He literally gave the run-it-up signal.) At one point, the assistant asked Spurrier to score more and he replied, “I’m trying son!” (Greatest coach ever!) 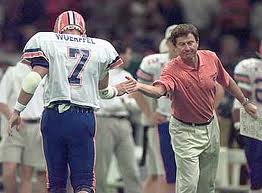 I feel the scoring was justified, especially since the Gators lost by a score of 62-24 in the previous season’s Championship game against Nebraska. I had to endure every single excruciating moment. Sometimes every team is on the business end of an ass-whooping. (For me, the Nebraska game was “good times!” As you can probably imagine, my phone didn’t stop ringing during that blowout.)

One of my favorite stories concerning running up the score happened on ESPN Sunday Night Football. The Vikings were playing the Seahawks and everything went wrong for Minnesota. The Vikings were down 35 points in the first half and commentator Mike Patrick said, “if you are just tuning in, the game recap is simple, the Seahawks won the toss and elected to kick the bejesus out of the Vikings!” (It was classic!)

Another favorite blow out game happened last year in the PAC 10 conference; USC was playing Stanford. For those who don’t know, USC has a history of dominating the conference and blowing teams out. Last year, Stanford was the better team and coach Jim Harbaugh decided to go for a two point conversion at the end of the game. No big deal except for the fact that Stanford won 55-21. USC coach Pete Carroll approached Harbaugh after the game and asked, “What’s your deal?”

Honestly, I have no idea why Carroll was angry. USC destroyed Stanford by a score of 66-19 in 2005. Harbaugh had the best possible response to Carroll’s question. He simply said, “What’s your deal?” (One of the best endings ever!)

Hands down, my favorite football moment of all time is not only funny, but a little racist. (OK, maybe it’s a lot racist!) The incident happened during a game on ESPN. I can’t remember the game but one team’s running backs were gaining a lot of yards and a commentator said, ‘’These guys are running like they’re the Denver Broncos.” This game happened in the early 2000’s when the Broncos had the league’s best run attack. Every year, no matter who the running back was, Denver put up big numbers. (I truly miss the good Old days!)

The other commentator replied, “No one runs like Denver. You can put a Puerto Rican back there and he’ll gain a thousand yards!” This was before DVR and I have searched high and low to find the footage, to no avail. (One day, I will find the tape!)

For those of you who are fans of running up the score, be sure to tune-in to the last game of the season between Florida and Florida State. The Gators were on a seven game win streak in the “rivalry”, before finally losing last year. To celebrate their victory, the Seminoles fans decided it was a good idea to pay for a banner to be flown above the stadium during the Gators’ spring game. The banner featured the score of last year’s game, 31-7, and the plane circled the stadium for an hour. (The Seminoles are idiots. Payback will be a bitch on her period!)